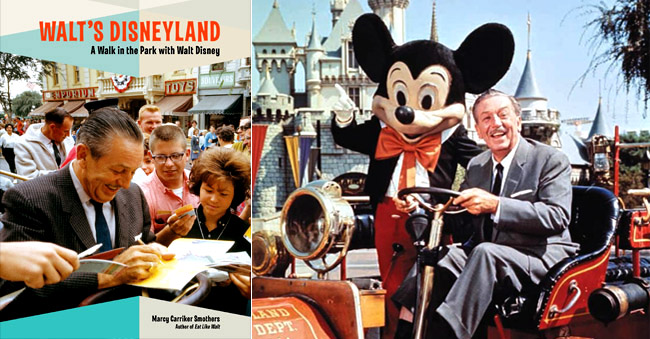 WALT'S DISNEYLAND (A Walk in the Park with Walt Disney)

"Most of his proposed park produces no revenue but will be expensive to build."

"It will be too expensive to operate."

"Custom rides will never work. They'll cost too much to buy & will be constantly breaking down."

I recommend you read this exciting, full-color book slowly, a few pages at a time, because you'll be glued to every word & astonished by many never-before-published photos, as you learn a lot of fascinating stuff about "the happiest place on earth," and how, in spite of long-shot odds, it came to be.

You also won't want this incredibly entertaining book to end.

Using Walt & his team's own words, this book comes "alive," as the highly skillful & passionate author weaves a remarkable & memorable mosaic of what it would be like to create and walk with Walt through every section of the fabulous wonder of the world.

You'll hear the Mickey Mouse inventor's psychology in making his gigantic, impossible dream come true. What an optimistic, risk-taking, creative genius this guy was because he never grew up and always had a childlike curiosity, combined with an adult's brilliant wisdom, a possibility-thinking mind, a stubborn determination, an ability to overcome failures & obstacles and the drive to make things right.

He put himself in the park guest's place to figure out how to maximize joy and minimize negativity. Disneyland became an escape from the real world; a grand place to have as much fun as possible; a spot you'll always, joyfully remember and tell acquaintances about, and a fun experience for all the senses.

You'll learn about his eye for detail, his courage to take risks, his loyalty to employees, his humbleness (even insisting on standing in long lines for rides, to better understand what it was like and how he could improve it for guests), how he loved to drive the Fire Truck, engineer the Train and pilot the Mark Twain Steamboat, and how he created a gift for the world that keeps on giving.

He once said, "Disneyland will never be finished, as long as there's imagination in the World." And it never has been. It's constantly evolving, being re-imagined & and always being cleaned. Walt's wishes & magic remain.

Out of many Orange Groves & a few acres of Walnut Trees, Disney and his imaginative team & contractors, scooped out lakes & riverbeds, using the dirt for creating rolling hills, islands & mountains.

He wanted guests to leave with smiles on their faces and provided fireworks to THANK them for coming.

Walt had his steam trains circling the entire park so people could learn where things were by taking a ride. He knew guests got exhausted walking in other amusement parks, so he designed a hub with spokes going to different parts. If someone was tired, sick or old, they could rest on benches and let their kids or others go off and return in a certain amount of time.

Walt cared about his employees and treated them alike. He'd even leave his apartment atop the Fire Station at night and talk with the people sweeping dust out of the trolley tracks.

He popularized trash cans with side swing doors so nobody would see garbage inside. Storefront windows were built lower to the ground so little children could peer inside without having to be lifted.

Walt always tried everything out before the public did, so things would be just right.

What brought a smile to his face was watching others have lots of fun. He loved to find out what guests were thinking and saying & would put on a hat, dark glasses & maybe some older clothes to go unnoticed throughout the park.

Julie Andrews once said that if he wasn't in disguise, visitors would easily recognize him. "They felt like they knew him & would come up, thank him and ask for autographs."

He didn't want guests to worry about their dogs being locked in cars, so the dreamer created "Dogland" out in front, where you could safely leave your pooch.

Disney reps sent water from many oceans, rivers & lakes that were dumped by kids into the new, "It's a Small World" attraction.

Walt once said, "The same scientific equipment that guides rockets to the Moon is used to make Jose (bird) & his little friends in the Tiki Room, talk."

He loved the bean soup at Nixon's Restaurant in Whittier. Walt was able to have owner, Don Nixon, talk his brother, Vice President Richard Nixon, into coming with the family to officially open the Monorail (1959).

Disneyland had the first daily operating monorail in North America.

Walt named each of the dwarfs & gave them a unique personality. Snow White's Wishing Well was Walt's idea. He had the coins collected and given to children's charities.

He said, "There's no use you talk about the future, unless you build it." The Monsanto Home of the Future (1957) had the first Compact Home Microwave.

"Walt probably did more to heal or at least soothe troubled human spirits than all the psychiatrists in the world," said TV's Emmy Award-winning journalist Eric Sevareid.

Perhaps the best photo is the cover, where you see a beaming Walt, signing autographs for his beloved guests on Main Street, USA. Some of the seldom-seen pictures of Walt and his wife, Lilly, are priceless as are the behind-the-scenes photos & maps on Disneyland's development.

(The reviewer first visited Disneyland a year after it opened. He was never an employee but did graduate from Disney University & promoted in the media, the park's famous "America the Beautiful Show," inside the Circle-Vision 360-degree Theater, for its sponsor, AT&T/Pacific Telephone. His first date, with his future wife, was at Disneyland. He used to sing, "It's A Small World" to help his baby son fall asleep. An Anaheim friend, the late Elmer Thill, sold 10 acres, with a major well, to a company which bought property for Walt that became part of Disneyland.)